Breast cancer advocacy has hinged for decades on the idea that early detection – via screening mammography – is the key to breast cancer survival. Mammograms save lives, and questioning the value of that bumper-sticker science is not just raising a hypothesis, but a waging a sexist, classist attack on womankind.

Just look at this screencap from Mammographysaveslives.org: 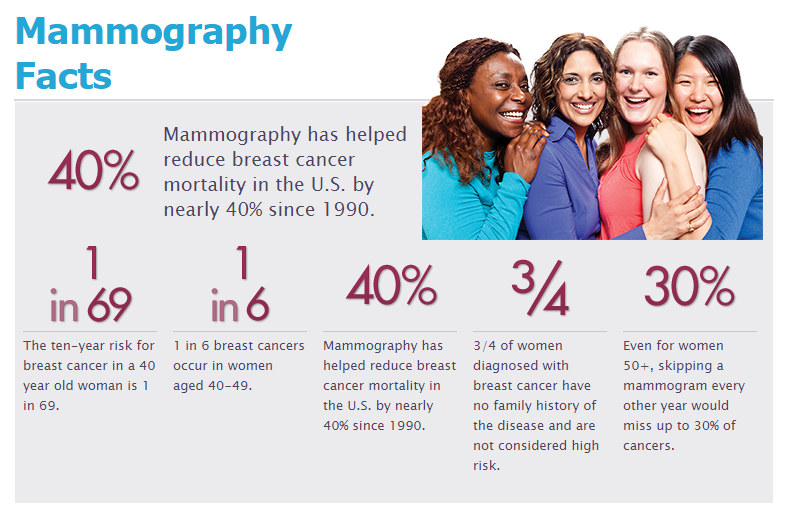 Who needs citations? It says right there that these are FACTS.

Some jerk at the Dartmouth Institute for Health Policy and Clinical Practice was not persuaded by FACTS and decided it was time to kill some women. H. Gilbert Welch, M.D., M.P.H. and colleagues reviewed SEER data from 1975-2012 to analyze the impact of screening mammography on the size of breast cancers at diagnosis as well as track mortality trends over the same period. If screening were effective, the villains suggest, we would see a decrease in detection of large cancers over time.

The authors are quick to point out that a decrease in the proportion of large cancers does not equate an absolute reduction in the detection of these cancers. In fact, the authors write, “Screening mammography reduced the number of large cancers detected by only 30 per 100,000 women,” while “162 more small cancers were observed per 100,000 women.”

Oh, good. No one needs to fix the banner.

Not at all manipulative. FACT.

But the authors speculate that only 30 of these 162 small cancers (less than 20%) would have progressed to clinically-significant tumors. And the other 80%? Well. Are the four women in the photo above so very happy because they’re among the incremental cases who benefited from screening and “caught it early”? No one tell three of them that they had completely unnecessary treatment.

You can bet these cases are treated. Breast cancer patients are f*cking nuts. I know this. I sit in waiting rooms with them all the time. They make up 20% of new cancer diagnoses annually, but they do 100% of the crying. No one has a problem with active surveillance for lung nodules and prostate cancer, but you try talking a breast cancer patient out of a totally unnecessary mastectomy. These cases may proceed to have any number of treatments, including disfiguring surgery (lumpectomy or mastectomy), radiation, which is associated with a host of long-term issues, including damage to underlying anatomy, like the heart and lungs, and toxic systemic therapies.

Early detection clings to an outdated theory that size matters, while, in reality, tumor biology and genetics have become more compelling predictors of outcome. The Dartmouth authors, rather elegantly, describe the interpretation of mammography as “an anatomy-based search for small structural abnormalities that are too small to be felt.” That’s it. Imaging is not a crystal ball, and it doesn’t reveal the most important characteristics of the lesions. As a result, the outcome of the Dartmouth analysis is not entirely surprising; the surprise is the continued hand-wringing about the lack of compliance with screening recommendations and the persistence of the mythology that mammography “saves lives”. The Heimlich saves lives. Screening programs are not finding aggressive cancers sooner, are not reducing mortality (those gains are attributed to improvements in systemic therapy), and have only succeeded in identifying greater numbers of indolent cancers that do not require treatment. You don’t get all this for free: patients with negative mammograms or benign findings still incur the expenses of screening and, potentially, additional diagnostics. There’s also radiation; not that X-ray exposure is so risky, but think of the grief people give their dentists over annual dental X-rays, which expose patients to a fraction of the radiation of a mammogram.

With all of this said, I tried to find some justification for indiscriminate screening. It didn’t go well.

We could resume making sacrifices to the gods and spin a more persuasive benefit than the one we can calculate from screening mammography. This is the return on our most sacred public health initiative?